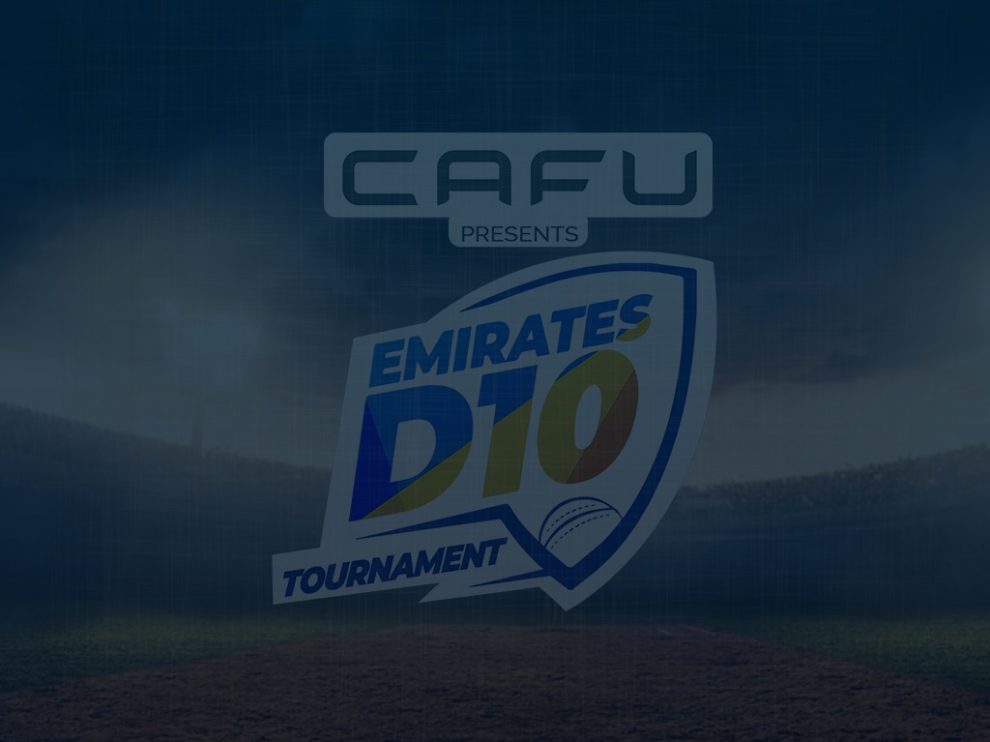 The second leg of CAFU presents Emirates D10 tournament kicked off at ICC Academy Dubai, with Dubai Pulse Secure took on Abu Dhabi, with Dubai Pulse Secure winning the toss and opting to bowl first, as Kai Smith and Rameez Shahzad begun the innings, Rameez was dismissed for 5, while Ali Abid was undone by Faisal for a duck. Ghulam Farid put on 31 runs stand with Smith as Farid was dismissed for 20. K Smith made 22 off 13 balls, while late surge from Usama scoring 18 off 12 balls, took Abu Dhabi to 86/6 in 10 overs. Ibtisham picked up 9/4 in 2 overs. Dubai Pulse Secure began their innings with Adnaan Khan and Fawad Nawaz provided them a blistering opening stand to get their side over the line. Adnaan scored 43 off 20 balls, while Fawad remained unbeaten at 38 off 23 balls, as Dubai Pulse Secure chased the target in 6.5 overs won the game by 10 wickets. 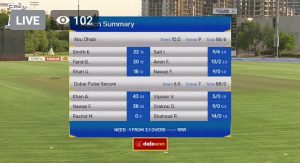 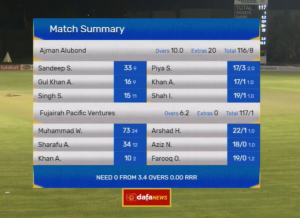 The third game of the day was played between ECB Blues and Team Abu Dhabi as Team Abu Dhabi won the toss and elected to bowl, as Rohan Mustafa and Vritya Aravind provided ECB blues a blistering opening stand by putting 115 in 6.5 overs, as Rohan was dismissed for 40 off 22 balls by Jalal. Vriitya kept on scoring runs as he jotted 89 off 29 balls with 8 sixes, to take ECB blues to a competitive total of 150/3 in 10 overs.

Chasing a mammoth total of 151, Rameez Shahzad put up an aggressive start to the innings for Team Abu Dhabi by a fighting half-century off 28 balls, as Kai Smith provided him support with 24 off 15 balls, but no-one from other end supported them, as Team Abu Dhabi only managed 95/3 in 10 overs, as ECB Blues registered another win by 55 runs. 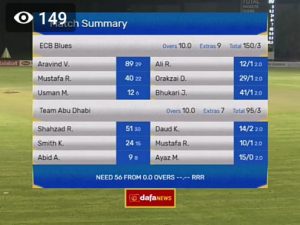 Fourth and the last game of the day between Ajman Alubond and Sharjah Bukhatir XI, as Sharjah opted to bowl first with Ameer Hamza begun the innings with a quickfire half-century off 20 balls, Sapandeep was dismissed for 5, while Sandy Sandeep was undone for a duck by Gopakumar G. Omar Farooq provided some fireworks in the later part of the innings by scoring 45 off 25 balls, as Ajman Alubond managed 110/3 in 10 overs. Gopakumar picked up 17/2 in 2 overs. Chasing the target of 111, Khalid and Renjth couldn’t provide a decent opening stand as Saqib dismissed both batsmen for 8 and 0 respectively. Rizwan Cp and Fayyaz Ahmad were dismissed by Omar, as Sharjah was reeling at 37/5. Umair Ali and Syam got together for the 6th wicket stand, as they pilled up 58 runs 3.1 overs to take their side within touching distance, as Ali Anwar sealed the deal for Sharjah at the last ball of the game by 3 wickets. Saqib picked up 25/3.