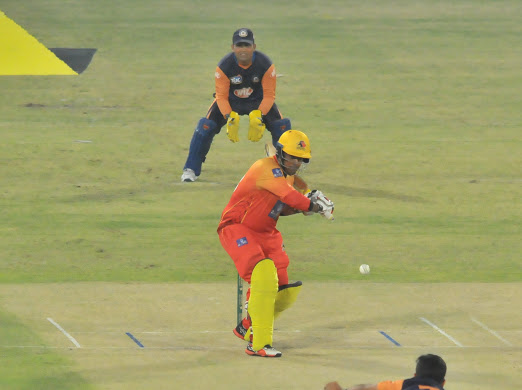 The Friday double-header saw KPK taking on Baluchistan in the first game, as KPK looked to register first win, while Baluchistan wanted to continue their winning form.

Baluchistan batted first after winning the toss, with Shaheen providing an early breakthrough for KPK by dismissing Imam and Awais Zia, with Baluchistan reeling at 36/2 Bismillah was trapped in front by Asif Afridi, with Baluchistan struggling at 56/3. Imran Butt chipped in with a slow 37 off 32 balls, while Haris Sohail’s sluggish 29 off 30 balls, could only take Baluchistan to 152/9 in 20 overs. Shaheen Afridi picked up an impressive 20/5, his 2nd fifer in the last 3 games.

Fakhar and Rizwan provided a blistering opening stand, as Fakhar struck 5 boundaries in his cameo off 25. While Rizwan made an unbeaten half-century. Hafeez chipped in with a valiant 45, as KPK registered first win inside 17 overs by 7 wickets.

Hungry looking Sindh were in the pursuit of their first win, as they took on confident Central Punjab in the second game of the day.

Central Punjab batted first, with Rizwan Hussain and Kamran Akmal were taken out of the equation early on by Sindh bowlers, while test Batsman, Abid Ali tried to build on, as he made an impressive half-century, but with the collapse of the middle order, the hopes of getting to 160+ looked dim, as Central Punjab remained at 110/6 in 17th over. A late surge from Qasim Akram and Usman Qadir took Central Punjab to a respectable total of 154/7 in 20 overs, as Qasim scored 21, while Usman scored 20. Sohail picked up 31/3

Chasing a modest total of 155, Sharjeel and Khurram provided a blistering opening stand, as the pair tore apart Punjab’s bowling lineup by jotting 134 in 17 overs, Sharjeel was dismissed for 77, while Khurram made 50, Azam and Sarfaraz saw Sindh home in the 19th over, as they registered their first win of the tournament.