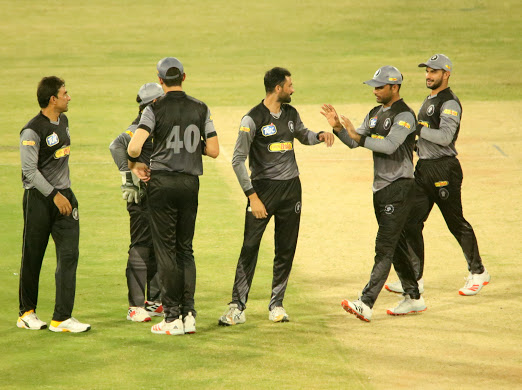 Weekend blockbuster at National T20 Cup saw the defending champions Northerns taking on the experienced Central Punjab team, as Shadab’s side looked to continue their winning momentum, while Saad Nasim wanted his side to make a brief comeback in the tournament.

Central Punjab put Northerns to bat first on a slow & sluggish wicket, as Ali Imran and Zeeshan provided a slow start. Zeeshan made 20 off 30 balls, while Ali made 15 off 19 balls, with Northern struggling in first 10 overs at 45/3, Shadab Khan stepped in with another impressive show with the bat, well supported by Rohail, Nawaz and Umar Amin. As the three youngsters helped Northerns to put on 155/8 in 20 overs. Shadab scored 30, while Rohail jotted 21, and Asif made 24. Osman Qadir picked up 28/3 in 4 overs.

Chasing a stiff target of 156 on a difficult wicket, Haris Rauf got the better of Kamran Akmal early on. Rizwan and Abdullah tried to built on, but Abid Ali was undone for 36. Rizwan continued his poor form, as he was dismissed for 14, Saad Nasim lasted for 14 only, as Haris Rauf and Musa ran through the batting lineup of Central Punjab, by picking 26/3 and 23/3, as Central Punjab were bundled out for 120 in 18 overs.

Second game of the day, was played between the dark horse; KPK and Winless Southern Punjab, as KPK batted first looking to pile up runs. Fakhar was undone early on for 13 , but Hafeez and Rizwan kept the scoreboard ticking by scoring quick runs. Rizwan scored 2nd consecutive half century before perishing for 55, while Professor showed his class with an aggressive 67 off 35 balls, Iftikhar joined the party late, but he jotted 45 off 20 balls with 3 sixes to take KPK past 200, as they put on 200/5. Rahat Ali picked up 35/2

Zeeshan Ashraf and Shan Masood tried to accelerate at the start but, they couldn’t get going, Shan was undone by Iftikhar for 7 , while Zeeshan became Shaheen’s victim for 15. Umar Siddiq and Sohaib Maqsood then got into the act by scoring freely. Umar scored a fluent 16, while Sohaib looked in song today, as he smoked lusty blows in his valiant knock off 70 including 6 sixes. Hussain chipped in with 38, while Saif scored 22, with 22 requiring off last over. Hafeez managed to defend it for KPK, as they won the game by 6 runs. Hafeez was named man of the match.