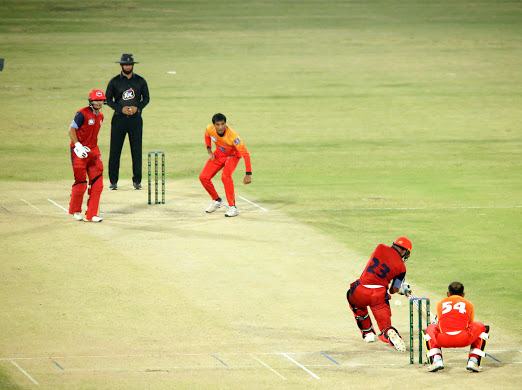 Sunday classic at the National T20 Cup saw the Southern Punjab seeking their first win in the tournament against Baluchistan in the first game of the day, where Baluchistan batted first with Awais Zia and Imam Ul Haq began the innings. Imam looked into sublime form today, as he ruled out the ‘Only ODI Batsman’ status to his name in fine style by cracking half-century off 25 balls, as he went on to score 94 off 54 balls with 4 sixes. Bismillah Khan chipped in with an aggressive 39, but the real handy cameo came from Haris Sohail and Amad Butt. Haris smashed a half-century off 24 balls, while Amad scored a brief 22 off 7 balls, taking Baluchistan to a Mammoth total of 230/4 in 20 overs. Bilawal Bhatti remained the most expansive bowler with figures of 61/0 in 4 over’s.

https://twitter.com/TheRealPCB/status/1312738731032481792?s=20
Southern Punjab had an awful start to the chase of 231, as they lost Zeeshan Ashraf in the first over, but Shan Masood then took control of the proceedings by scoring a half-century off 31 balls, with the support of Khushdil Shah, who played the helping hand once again by scoring runs quickly. Shan went on to score an impressive 72 off 42 balls, while Khushdil made 72 off 34 balls with 4 towering sixes, but this didn’t help the cause of Southern Punjab, as they fell 16 short. Akif Javed picked up 35/3 in 4 over’s.

Super Sunday’s second game was played between the defending champions Northern and Sindh, as Sindh looked to break Northern’s winning streak of 8 games.

Sindh put Northern’s to bat first after winning the toss, hoping that they’d restrict them to less than 200. Ali Imran and Zeeshan did the ritual to provide a flying opening stand. Ali made quick fire 27 with 6 boundaries, before being dismissed by Hasnain, while Zeeshan Malik looked in fabulous hitting mood today, as he made 84 off 52 balls. Haider smoked 3 sixes in his cameo of 35, Northerns were up and running at 140/1 in 13 overs, but Sindh pulled the things back in the latter half of the play by taking quick wickets to restrict Northern at 204/5 in 20 over’s. Hasnain picked up 37/2.

Sindh had a disastrous beginning to their innings as they lost Sharjeel in the first over, Azam Khan was promoted up the order and he made full use of that promotion by smashing a half-century off 23, as he went on to make 55 off 28 balls with 5 sixes, Khurram Manzoor made a slow half-century off 40 balls, as the required rate crept up, Sarafarz made 11 off 10 balls, as Sindh required 50 last 3 overs, Anwar Ali made a valiant effort, as he jotted 37 off 17 balls, but these efforts weren’t enough for Sindh, as they fall 13 runs short, handing Northern their 9th consecutive win in National T20 History,
Tagscricket Imam-ul-Haq National T20 Cup pakistan cricket PCB