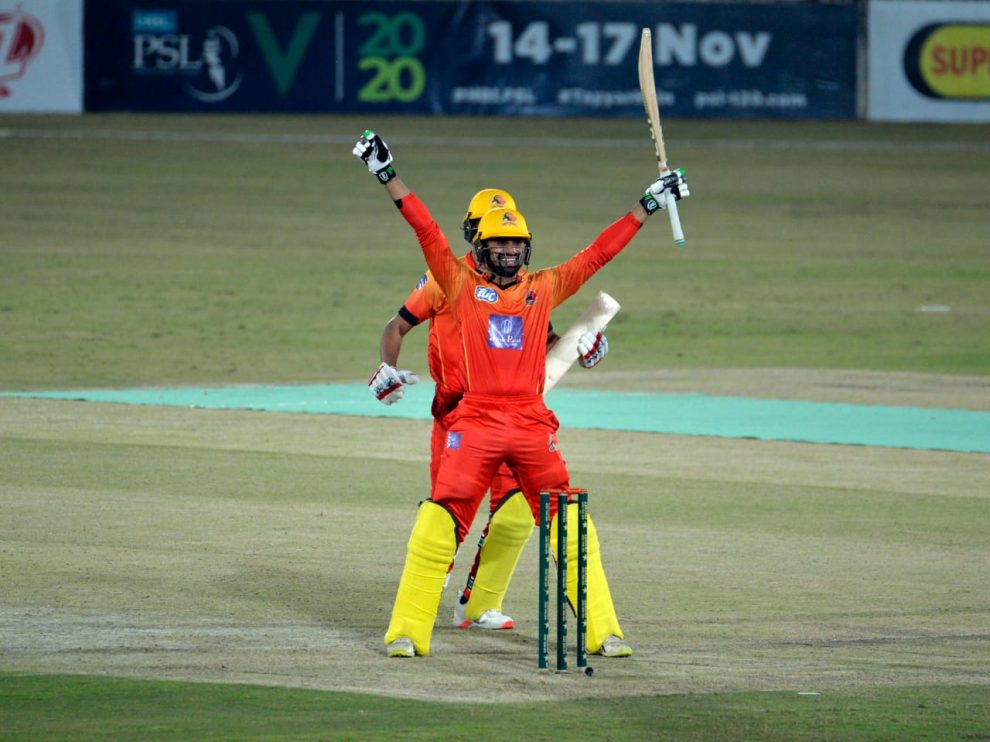 KPK took on Sindh in the first game of the day, as Sindh looked to grab the victory to secure their chances of playing the Semi-Final, as KPK batted first with Sohail Khan dismissed Fakhar early on for a duck, Rizwan continued his bad form, as he made 12 only. Farhan was promoted up the order but he couldn’t grab the chance, as he was dismissed for 19. Iftikhar made a struggling 14 off 17 balls, as KPK’s problems increased with the dismissal of Haris & Shoaib Malik, leaving KPK reeling at 69/6 in the 14th over. Musadiq Ahmed and Usman Shinwari showed some real intent in the later stage of the game to take KPK at the competitive total of 138/9 in 20 overs. Musadiq made 25, while Shinwari made 36. Sohail Khan picked up 12/3

Chasing 139, Sindh’s side were jolted early on as Sharjeel was dismissed in the first over for a duck. Asad Shafiq was undone by Imran for 1, while Azam Khan was undone for 5 by Imran Khan, Hassan Khan’s runout for a duck leaving Sindh struggling all over the place for 34/7, as KPK were marching towards a remarkable win. Danish Aziz and Anwar Ali got together for 8th wicket stand, as they rebuild the innings by adding 77 runs for the 8th wicket stand, as Anwar Ali made 33 off 32 balls before getting caught by Rizwan,

It's a Bird, It's a Plane, It's Superman

With 19 needed off last over, and 15 off last 3 balls, Danish Aziz smoked Iftikhar for 15 off 3 balls, to take Sindh over the line on the last ball, as Sindh registered 4th win in the tournament. Usman Shinwari picked up 20/3

The second game of the day saw Punjab’s Debry; South Punjab vs Central Punjab, as Shan Masood’s South Punjab batted first, with captain looked in fine form score, as he scored a half-century off 36 balls. Sohaib Maqsood hit three towering sixes in his knock off 25, while Hussain made yet another impressive half-century off 32 balls, he made an unbeaten 59. Khushdil’s blitz of 47 from 23 balls, help Southern Punjab to post 205/3 in 20 overs. Zafar picked up 20/2

Chasing 206, Babar was undone in the first over for duck by Aamir Yamin, Kamran and Abdullah Shafique tried to build the innings, but inform Abdullah was undone by Abbas for 13. Kamran made 32 before being dismissed by Illyas. Rizwan Hussain and Ikhlaq got together with the required run rate off 12, as Rizwan was dismissed for 29 off 27, while Ikhlaq made 30 off 18 with 2 sixes. Faheem Ashraf lit up the show with 5 sixes in his knock of 54 off 22 balls, as Central Punjab needed 12 off the last over, but Abbas bowled an exceptional over to help Southern Punjab win a thriller by 4. Abbas picked up 41/3