Day 3 of the DREAM II EMIRATES D20 begun with Abu Dhabi took on Dubai in Game 7. ABU DHABI won the toss and elected to bat. Aaryan couldn’t get going early on, as he was dismissed for 1. Kai Smith made 13 off 22 balls. Osama provided Abu Dhabi some impetus as he made 31. Mazhar made 15 before becoming Tahir’s third wicket. Jishnu’s late surge of 20, helped Abu Dubai put on 107/9 in 20 overs. Tahir Latif picked up 25/4

Chasing 108, Dubai was provided a solid opening stand by Adnaan and Haider Shah, as they put on 48 in 4 overs. Adnaan was dismissed for 26 by Mazhar. Ronak could only make 2. While Punya and Haider Shah helped Dubai to chase the easy target in 14th over and won the game by 8 wickets. Haider Shah remained unbeaten on 55, while Punya remained not out on 20. Mazhar picked up 35/1 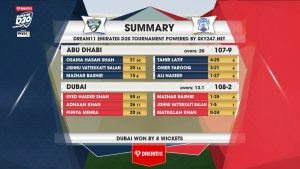 Second game of the day, was played between Ajman and ECB blues, as Ajman batted first with Zahoor and Aryan providing early breakthroughs; Shakoor made 10. Nasir Aziz was dismissed for a duck. Rameez Shahzad was dismissed for 7. Asif Khan showed some resistance by scoring 31 off 29 balls. Aryan wrapped up the tale, as Ajman was dismissed for 93 in the 17th over. Aryan picked 8/4 in his 4 overs. Zahoor picked up 9/2 in 2 overs.

Chasing an easy target of 94. Vriitya and Rizwan CP provided a solid opening stand, as Vriitya was dismissed for 28 off 16 balls. Rizwan Cp scored an unbeaten 33, while Ali Shan remained not out on 22, as ECB blues completed yet another victory in the 13th over, by 8 wickets. Shareef picked up 15/1 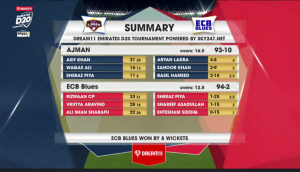 Last game of day 3, was played between Fujairah and Abu Dhabi, as Fujairah batted first after winning the toss. Rohan was dismissed early on for 10. But Waseem Muhammad played a delightful innings by scoring first century off the tournament off 60 balls. Waseem remained unbeaten after scoring 101 off 60 balls. Naeem made 23, while Ahmed Raza’s quick fire 31 off 16 balls, took Fujairah to 181/3 in 20 overs. Mudassir picked up 26/1

Chasing 182, Paresh was dismissed early on for duck off Akif. Kai Smith was undone by Akif for 11. Aaryan’s runout leave Abu Dhabi in trouble at 30/3 in the 7th over. Midhun and Mazhar did the rebuilding as they added quick runs; Midhun made 40 off 31 balls. Mazhar Bashir and Pasindu tried to score quick runs, but their efforts weren’t enough as Abu Dhabi fell 48 runs short. Mazhar scored 38 off 29 balls. Akif Raja picked up 10/2 in 3 0vers.