Day 5 of the DREAM II EMIRATES D20 begun with ECB blues took on Sharjah, as ECB batted first. Vriitya and Rizwan began the inning, with Rizwan being dismissed early on for 2 by Kashif. Ali Shan and Vriitya then accelerated the innings for ECB by getting quick runs, as Vriitya scored a brilliant 86 off 60 balls, while Ali Shan made 51 off 39 balls. Waheed Ahmed’s quickfire 24, helped ECB to put on 170/4 in 20 overs. Hafeez picked up 31/2

Chasing 171, Renjth was dismissed early on for 7 by Aryan. Khalid Shah made an impressive 30 before handing his wicket to Aryan. Aryan then got his third scalp by removing Kashif for a duck with Sharjah reeling at 43/3 in 6 overs. Aryan’s magnificent spell continued as he dismissed Badiuzzama Sayed as his 4th scalp. Umair Ali was undone by Waheed for a duck, as the Struggling Sharjah side slide to 53/6 in 10 overs. Yuvraj fought back with 24, while Faisal Altaf scored 13, as Sharjah could only manage 106/8 in 20 overs, ended up losing the game by 64 runs. 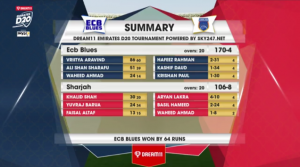 The second game of the day saw Fujairah taking on Ajman, as Ajman won the toss and elected to bowl, as Waseem was dismissed off the very first ball of the innings by Sheraz for duck. Rohan and Usman Khan held the innings together for Fujairah by adding 114 runs in 12 overs. Rohan made 40 off 33 balls before being dismissed by Zubair. Usman Khan made a brilliant 78 before being runout. Ahmed Raza’s 16. helped Fujairah to put on 164/6 in 20 overs. Sheraz picked up 26/2

Chasing 165, Ali Khan provided a decent opening stand with Asif. Khan made an impressive 40 off 39 balls, while Asif made 8. Abdul Shakoor made a steady 22 off 27 balls. Rameez Shahzad and Amjad Gul showed some resistance in the end, as Rameez scored 26, while Amjad remained unbeaten on 33 as Ajman ended up  losing the game by 17 runs . Sabir picked up 25/2 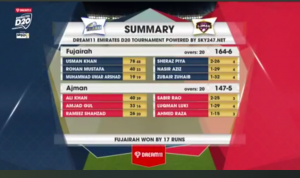 Sharjah took on Dubai in the last game of Day 5, as Sharjah batted first, with Renjith and Khalid Shah begun the innings. Renjith scored a brisk 22 off 16 balls. Captain Fayyaz Ahmed chipped in with a solid half-century off 43 balls, with 3 sixes. Umair Ali scored 21 as Sharjah ended up with 156/8 in 20 overs.

Chasing 157, Haider Shah was dismissed for a duck by Hafeez. Hafeez then ended Adnaan’s cameo off 23. Ronak and Paneya couldn’t score freely as the required runrate climbed up. Punya was dismissed for 13, while Ronak made 16, as Ajman were reeling at 60/4 in 9 overs. Shahrukh’s dismissal for 11 brought more problems for Ajman. Bilal Cheema played a handy cameo of 31, but this wasn’t enough as Ajman ended up on 127 all out in the 20th over. Hafeez Rehman picked up 25/3