First Semi-Final of Emirates D20 saw, Fujairah taking on Dubai, as Fujairah batted first with Waseem and Rohan Mustafa provided a decent opening by putting up 58 in 7.2 overs. Waseem perished for 21 off 22 balls. Rohan Mustafa scored a valiant 40 off 30 balls. Usman Khan scored a brilliant 32, but Fujairah struggled in the middle phase of the innings, as they lost quick wickets; Umar made 7, Sandeep was dismissed for 4, Farooq lasted for 11 only, as Fujairah made 131/7 in 20 overs.

Chasing 132, Adnaan Khan and Haider Shah provided a sluggish 20 runs opening stand in 5.4 overs, as Adnaan was dismissed for 12 off Asif. Punya was undone by Rohan for 8 only. Haider Shah resisted his way through, but he consumed loads off balls; scoring 28 off 35 balls. Bilal Cheema made 8, as Fujairah’s brilliant bowling made it difficult for Dubai’s batters to get some runs, as Omar Farooq’s late surge of 29 from 18 balls, didn’t help the cause, as Dubai could only manage 115/8 in 20 overs, as Fujairah won the game by 16 runs. Akif Raja picked up 16/3 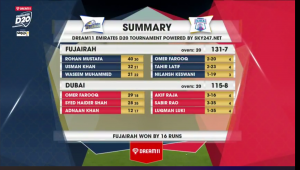 Second SEMI-Final of Emirates D20 was between, ECB Blues and Sharjah, as ECB Blues opted to bat first after winning the toss. Fahad Nawaz and Vriitya begun the innings for ECB Blues. The pair provided a cautious yet aggressive opening stand by putting on 105 in 13.4 overs. Fahad Nawaz was undone by Boota for 38 off 38 balls. Vriitya continued in his aggressive style, as he made 79 from 53 balls, while Ali Shan stepped in with an aggressive 28 off 15 balls, as ECB Blues posted a mammoth 170/4 in 20 overs. Hafeez picked up 33/1 in 4 overs.

Chasing 171, Sharjah lost Renjith early on for just 5. Khalid Shah made a solid 19 off 12 balls, as Sharjah struggled at 32/2 in 4 overs. Fayyaz Ahmed and Kashif Daud got together for the third wicket stand, they got great advantage of ECB’s loose bowling by scoring runs freely, as the pair the match-winning 129 runs stand to put Sharjah on the verge of the victory. Kashif Daud was run-out for 55, Captain Fayyaz Ahmed scored an unbeaten 86 off 46 balls, as Sharjah chased down the target in 17.1 overs to reach the Final of D20, where they’ll face Fujairah!

Sharjah lifts EMIRATES D20 after a thrilling Final!
Thirlling games continue at the D20, as Fujairah, ECB blues and Sharjah won the games on Day 9.
Comment