Grand Final of the EMIRATES D20 was played between Sharjah and Fujairah at the Dubai Sports City, as SHARJAH won the toss and elected to bowl first. Waseem Muhammad and Rohan Mustafa begun the innings,Rohan was dismissed early on by Hafeez for 13. Waseem Muhammad made a slow 19 off 21 balls. Usman Khan chipped in with yet another slow innings of 14 from 17 balls, as Fujairah struggled at 57/4 in 10 overs. Sandeep and Hamdan rescued the innings by scoring some quick runs, as Sandeep made 29, while Hamdan made 26, as Fujairah managed 130/8 in 20 overs. Hafeez picked up 34/2 in 4 overs.

Chasing a tricky target of 131, Khalid Shah was dismissed by Rohan in the first over. Renjith and Fayyaz Ahmed scored some slow runs, as Fayyaz made 12, while Renjith made 11. Fujairah’s bowlers sensed a comeback in the game by taking quick wickets, as Faisal Khan was dismissed for 6, while Boota lasted for 12 only, leaving Sharjah at 73/5 in 13 overs. Kashif Daud and Umair Ali’s partnership turned the game in Sharjah’s favor, as they put on a quick fire 23 runs stand, to edge Sharjah close to the target. Umair Ali was dismissed for 20 by Sabir. Kashif Daud’s brilliant half century sealed the deal in the last over for Sharjah, as they won the D20 tournament by 2 wickets. Rohan Mustafa picked up 17/2 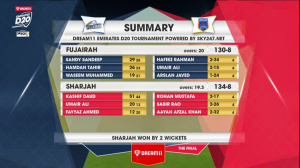 SPORTSFEVER360: THE 2020 YEAR IN REVIEW
Fujairah and Sharjah through to the D20 Final!
Comment